Educating the multiple aspects of the child is a goal for many countries in our globalizing and complex world. Succeeding in life is not merely about intellect, it is also about emotional stability, values, attitudes, and social skills. As we face an uncertain and complex world, abilities such as communicating and cooperating with others, values and attitudes which enable us to operate in a multicultural world, higher-order thinking skills, as well as basic and advanced knowledge in various fields, are everyone’s concern. Many educators, even in countries where schooling has mainly focused on developing the intellectual aspects of the child, are now turning to schools to take on a wider role in developing the whole child.

Japanese education has long emphasized the development of the whole child. It has periods of whole child education which are part of the official curriculum. One of the central components of Japanese style whole child education is the period of special activities, tokubetsu katsudo, tokkatsu  for short. Tokkatsu, though practiced universally within Japan, has rarely been introduced abroad.

This homepage provides information on Japanese style whole child education, especially tokkatsu, to the international audience to facilitate the cross-national exchange of information. We hope that this will add to the discussion on the educational structures, ideological foundations, and practices that educate the total child in different cultural contexts.

There has been a long history of educating the whole child in the postwar Japanese school curriculum.
The newest version of the Course of Study calls for a balanced development of the total child.

In order to thrive in the fast-changing society of the future, it is important to assure a balanced development of intellect-virtue-body, in other words, to assure a solid basis for academic competence (tashikana gakuryoku), rich emotions (yutakana kokoro), and healthy physical development (sukoyakana karada).

The new Course of Study started from 2020 for elementary school and 2021 for junior high school.

Hours of the Curriculum 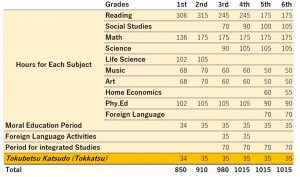 Noted: Taken and translated from the Ministry of Education homepage. https://www.mext.go.jp/component/a_menu/education/micro_detail/__icsFiles/afieldfile/2018/09/05/1384661_4_3_2.pdf 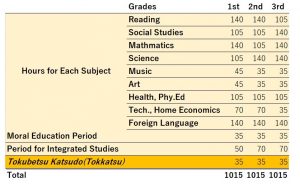 Noted: Taken and translated from the Ministry of Education homepage. https://www.mext.go.jp/content/1413522_002.pdf

Further Information on the Curriculum

One of the central areas of whole child education within the Japanese national curriculum standards today is the period of special activities, tokubetsu katsudo, for short, which brings together various non-subject activities such as lunch, club activities, and student councils. Tokkatsu is a regular component of the official curriculum.

A Short History of Tokkatsu

Course of Study for Tokkatsu

Implications of the Tokkatsu Model for Western Teachers

In recent decades, Japanese mathematics and science teaching has received well-deserved attention around the world (for example, http://hrd.apec.org/index.php/Lesson_Study / www.lessonresearch.net). Terms like “jugyoukenkyuu” (lesson study) and “neriage” (discussion that “kneads” or “polishes” students’ ideas) have been taken up by teachers in many countries around the world. But how many educators outside Japan recognize Whole Child Education as the essential foundation for Japanese educational success? How many recognize the term “tokkatsu?”

“Autonomy” describes the child’s need to feel some control over the environment and to be free of undue or arbitrary restraint. Japanese schools provide for children’s autonomy in many ways (Lewis, 1995). All children assume leadership, in a daily rotation that guarantees that the two monitors struggling to quiet the class could be you (and will soon be). Children help shape the goals and rules by which they live, coming up with personal and class improvement goals, and then reflecting on their progress. Discipline emphasizes self-evaluation rather than evaluation by the teacher, and self-management rather than adult control. Twice-daily brief class meetings and longer weekly meetings, led by students, provide a forum for students to raise and solve issues that arise in the classroom and on the playground.

“Belonging” refers to the child’s need for close, supportive relationships. That such relationships are fundamental to children’s healthy emotional and social development is basic to Western, as well as Japanese, theories of human development. Japanese elementary schools foster such relationships in many ways. They make friendliness and cooperation central, clear goals of classroom life. They emphasize everyone’s belonging to the class and the school community and scrupulously avoid ability grouping, individual awards, and other practices that imply that some members are more valued than others. Teachers expend much effort nurturing family-like small groups where children feel comfortable and able to speak up.

“Competence” is the child’s need to pursue activities regarded as worthwhile. Children naturally explore the world and try to make sense of it ― even without rewards or encouragement from others. Lessons in Japanese schools are often driven by children’s own thinking and by their involvement in tasks that are likely to be inherently interesting ― crafting boats that float, designing the ideal playground, exploring each room of the school, using measurement to understand the world around them. Such meaningful, child-driven activities are much more likely to meet children’s need for competence than would a focus on isolated “basic” skills. The breadth of the Japanese elementary curriculum is broad, with roughly one-third of class time devoted to what some might term “non-academic” subjects, such as art, music, physical education, moral development and special class activities. The emphasis on effort and participation, rather than on competition, further increases the likelihood that all children ― not just an academically able few ― will find areas of competence and feel themselves to be valued members of the school community.

Much Western research now confirms that students’ bonds to school (often called“connectedness” or experience of the school as a ”caring community) significantly reduce antisocial and self-destructive behavior and significantly increase academic outcomes (Battistich et al, 2000; Schaps, 2005). There is a huge body of knowledge about how to promote students’ experience of school as a caring community (Schaps, 2005, 2009). But we seldom give it even a fraction the attention that is given to the teaching of subjects that are evaluated by standardized test scores―though it may be the essential foundation that helps students develop the character and motivation to persist and succeed at school.

Many decades ago, I was surprised when a Japanese teacher told me that the most important job of elementary education is to “Create happy memories.” Too many Western educators see academics and whole-child development as competing concerns, when in fact they are essential to each other. When school is a place of deep, supportive human connections, students are motivated to be the best people they can–including to strive to learn. When school emphasizes values like friendship, cooperation, and responsibility along with a broad range of academic and non-academic pursuits, students get a much fuller appreciation of each other and of the wide range of skills and capacities that are important to human society.
I hope that this website sparks an interest in tokkatsu that, like the interest in lesson study, speaks to educators around the world.